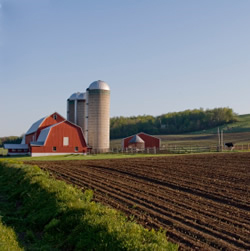 If you work as a farmer, dust and pollen are inescapable problems.  From chicken and cattle raising to plowing and grain harvesting, control of dust is a key need.  Developed specifically to remove particles in tough, dusty environments without using filter elements, Air-Cleaning BlowersTM (ACBs) can  help control farm equipment dust by removing most kinds of farm and grain-processing dusts while blowing out clean air for ventilation, pressurization and keeping equipment, animals and people cleaner.

Unlike cyclonic systems, spin blocks and other momentum-based air-cleaning systems, ACBs just throw the debris out.  No wasted energy, reduced air pressure nor clogging of valves and secondary blowers.  They also eliminate the need for the compressed air, and the energy needed to produce it, that many “self-cleaning” systems use to blow out accumulated debris.

No matter what kind of farm you operate, Air-Cleaning BlowersTM can help control farm equipment dust.  Originally developed for heavy industries such as steel, mining and fertilizer plants, ACBs are so effective that they are used by the US military in the Middle East to keep air conditioners cooling in a sandstorm.