The Safety Halo® — The Protective Cone Against Airborne Contaminants

Why Use We Clean Air's Safety Halos®

We Clean Air jumped into action after the COVID-19 pandemic began to develop PPE (personal production equipment).  However, we took a different approach from most—we developed a system of passive protection, which means that the user does not have to take any action, such as putting on a mask or a shield to protect him or herself.

These new protective air canopies protect people who work closely with the public or their fellow workers, especially for long periods.  They eliminate the thirst, fogging eyeglasses and other discomforts of masks and, thereby, the temptation not to wear them.  After extensive product development and lots of testing—including by NIOSH (the National Institute of Occupational Safety and Health, a part of CDC), Air Cleaning Blowers launched its new product, the Safety Halo® Protective air canopy.  Combining the design of units developed by NIOSH to protect coal miners from the dusts and the multi-patented Air Cleaning Blower, the Safety Halo® was created.

The Safety Halo® works in a revolutionary way to help keep germs in the air from reaching the faces of your workers, your family and other people around you.  They provide protection to people and products in close contact with the public, with ill patients, and with others who could exhale disease-causing germs in their direction.  Safety Halos® work by first filtering the air clean with an Air-Cleaning BlowerTM (ACB) which then blows clean air through a high-efficiency particulate-absorbing post filter and then downward to form a cone of protective air blocks or carries away germs exhaled by others away from the faces of people within the cone.  The Safety Halo’s® cones of air will also help protect your customers, your other workers and family members by trapping and carrying away germs that the cashier, meat packer or other worker might be exhaling.

Features of the Safety Halo®:

How Safety Halos® Differ from Other Air Purifiers

Many air purifiers you see are small and often require a lot of maintenance.  In addition, they generally clean air by recirculating it many times until it cleans out enough of the dust, allergens, germs and other particles in a confined space, such as a room.  That approach can work in a confined space where there is not much turnover of air, but it is not as effective in a store, hospital or factory with many people coming and going, doors opening and closing, and a central heating, ventilation and air-conditioning system constantly pumping in new air.  In addition, unlike a Safety Halo® protective air canopy, it can not focus its protection on the person who needs it most.

In contrast, Safety Halos® protect people directly.  They clean the air with an Air-Cleaning BlowerTM (ACB), when necessary followed by a high-efficiency particulate-absorbing post filter.  Then they—and here’s the key difference—gently blow the clean, slightly-pressurized air to form a protective cone around the person or food or other thing that they are protecting.  In other words, rather than just lowering the average number of dust particles and germs floating around the room, the Safety Halos® first blow the air where it will do the most good!

The cone of safety works to guard the workers and others in several ways.  First, it surrounds them with downward-moving air.  The movement of air in the cone blocks or grabs respiratory droplets and aerosols carrying Covid-19 viruses and other germs, as well as pollen, dust and other particles blown or exhaled toward the cone and pushes them down and away from the cashier, teller or fellow worker’s face.  In addition, the airflow expands gradually and helps move the contaminants away from him or her as well.  In addition, a special feature of the Safety Halos® further works to protect the person from germs and other airborne debris that manage to penetrate the outer layer of air of the cone.

This same cone provides the added benefit of blowing down much of whatever the person inside the cone exhales so that the person’s germs do not reach his or her customer or neighbors at work or other members of his or her family.

In addition, because the Safety Halos® target their benefits directly to the person or product they’re guarding, they can also work effectively in wide, open spaces such as a big store, a factory floor, an office, a school, a nurses’ station in a hospital, and many more areas—including outdoors, even if it is raining.

On top of all these benefits, Safety Halos® also serve the same function as ordinary air purifiers:  by filtering out the contaminants in the air and then blowing the air back into the room, the Safety Halos® reduce average germs in the air of rooms and other confined spaces, but only after they shield the people most at risk.

Safety Halos® install quickly and easily, take up little or no floor space, and allow simple maintenance by unskilled staff.  Standard models run on 115-125 volts, but we offer other electrical configurations, if you prefer.  Indoors, the Safety Halo® usually hangs from the ceiling on cables and hooks supplied with them.  If hanging them from a ceiling is not an option, they also mount solidly to stationary or movable stands, so that they can be used easily outdoors as well.  Normally, no drilling, cutting, or welding required! 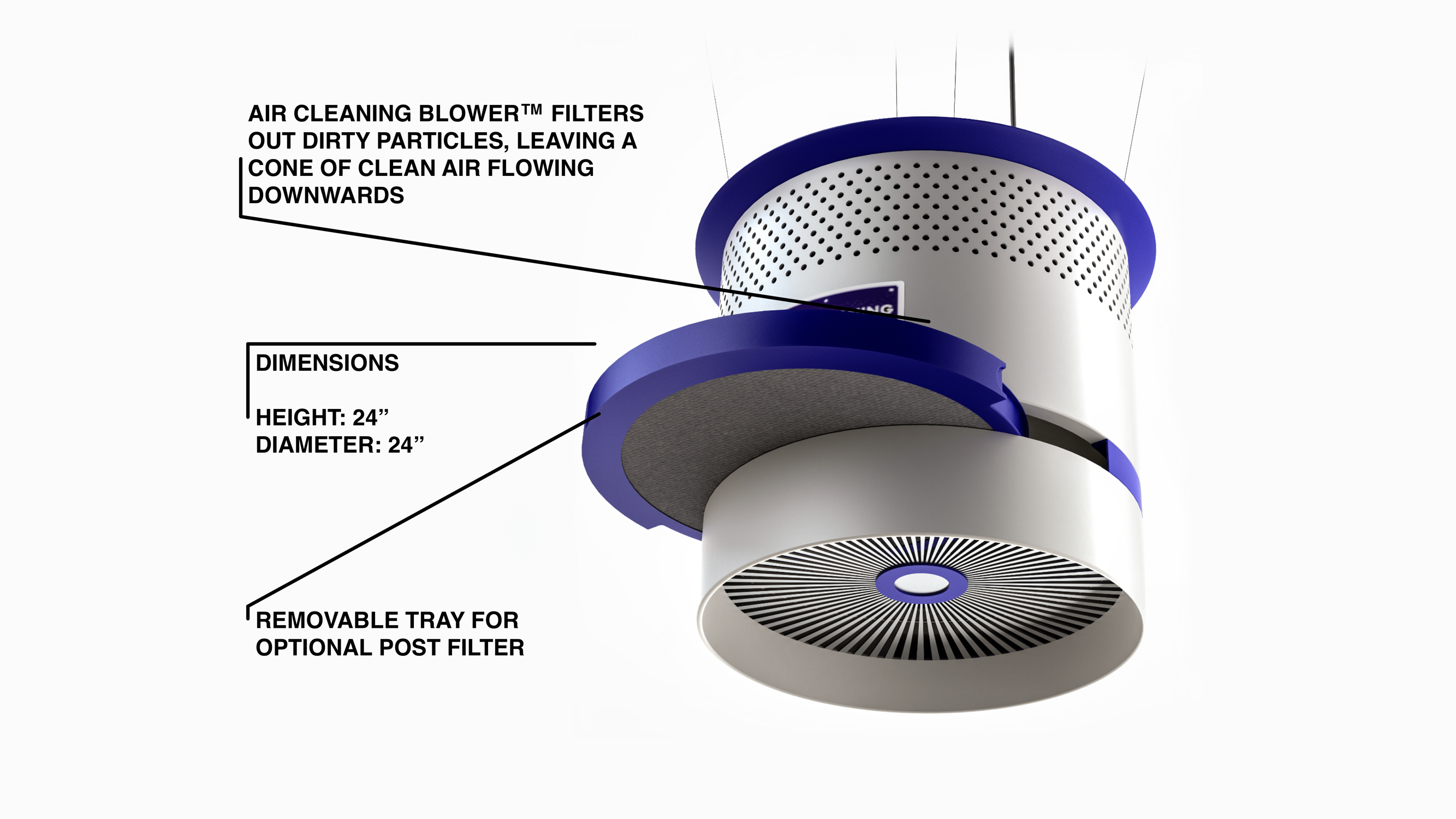