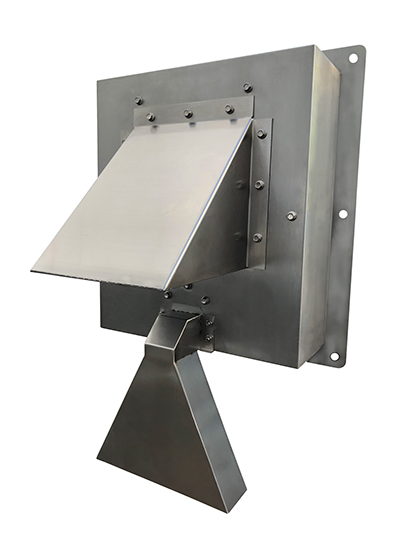 Instead of blocking and collecting the debris with air-intake filter media, ACBs use the momentum of the particles to separate them from the air and eject them directly.  The big benefit:  they blow and clean air without any intake filter elements to buy, store, replace or dispose.  Since debris does not accumulate in the units, you can count on steady airflow, air pressure and power consumption.  No fan with filter elements means no fan and filter maintenance!

Unlike cyclonic systems, spin blocks and other momentum-based air-cleaning systems, ACBs just throw the debris out.  No energy wasted spinning particles around, no reduced air pressure and no clogging of valves and secondary blowers.  They also eliminate the need for the compressed air that many “self-cleaning” systems use to blow out accumulated debris and, therefore, ACBs do not need the equipment or energy required to compress the air.

Independent testing found that standard ACBs remove 98+% of all particles in the air down to 10 microns (ten millionths of a meter) in size.  Special models remove smaller particles as well.  The smallest particles most people can see are about 50 microns, which means that ACBs remove virtually all the mass of dust in the air.  They also remove larger particles such as wheat chaff and wood chips.  As an option, ACBs can be made safe for hazardous (explosive) dusts as well.

ACBs can remove rain, mist and snow from the air, which keeps the air dryer and reduces the load on air conditioners, refrigeration and other dehumidifying equipment.  Another benefit:  unlike filter media, they will not become wet—or freeze up—and stop air from passing through.

No matter what kind of farm, factory, office or business you operate or home you live in, Air-Cleaning BlowersTM can help.  Originally developed for heavy industries such as steel, mining and fertilizer plants, ACBs are so effective that they are used by the US military in the Middle East to keep air conditioners cooling in sandstorms.

Air Cleaning Blowers, LLC also makes heavy and hazardous duty Air Cleaning BlowersTM (ACB) for use under extreme conditions.  The ACBs’ simple, solid construction makes them rugged enough for deployment with troops, equipment and enclosures almost anywhere.  They can provide cleaned airflow for cooling and ventilation and keep dust out of military sleeping quarters, kitchens, vehicles, and equipment.  In civilian applications, they keep dust out of tough applications as diverse as electrical controls in foundries, energy-recovery equipment in mines, and packaging equipment in powdered cheese and spice factories.  In addition, they can remove radioactive and other contaminated dusts and can pressurize emergency-response and other mobile facilities with clean air so that pressurized air leaks out to prevent contaminants from entering.  For more info on the Heavy-Duty Air Cleaning BlowerTM, please Click Here.