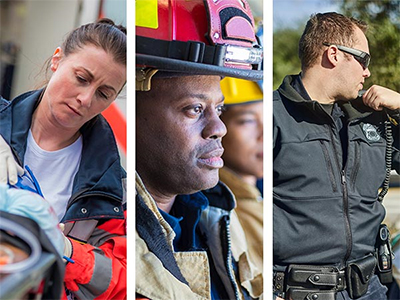 First responders respond to all kinds of situations, many of which involve contaminated air.  For instance, when responding to a bomb that went off leaving radioactive particles in the air, it’s difficult for the first responders to safely enter those areas to investigate.  Same with firefighters; when there is a building filled with smoke, it’s not only dangerous for them to breath in, but also difficult to see once inside.

Air-Cleaning BlowersTM (ACBs) can help.  Designed to remove even large quantities of particles in the air without clogging, they can separate out the contaminants and provide clean air under a wide variety of conditions.  Instead of blocking and collecting the debris with filter media, ACBs use the momentum of the particles to separate them from the air and eject them directly in patented, novel ways.  Their designs provide several big benefits to first responders:  without filter elements to capture particles, they do not form hot spots of concentrated hazardous particles that someone has to change and dispose.  The do not rot from disuse or poor storage and are always ready to go.  They can provide clean and bug-free air immediately to tents and other emergency structures.  They can be made light and easily transported and installed by one person.  They can run on virtually any kind of electricity—DC or AC, any voltage, including off generators or vehicle power.  They require little or no maintenance during use, unlike filters.  They can pre-clean and blow air through special downstream filters that remove chemicals or super-fine particles to keep them clean for as long as possible and eliminate the need for additional fans.  They also remove rain, mist and snow, so unlike filters they do not clog in bad weather—or worse, freeze up and stop all air flow—and they help keep the inside of vehicles and downstream filters dry during storms.

By having a portable Air Cleaning BlowerTM (ACB) on their trucks that can easily be installed in a window can significantly help with removing those particles or smoke in the air.  The ACB can sit right on a window ledge and be held in place by closing the window on top of it, and then plugging it in.  The ACB will then pull the air from around itself into its housing, and with the use of centrifugal force separate out the particles in the air out, spit them back outside and push clean fresh air into the building.

They can also be used to pre-clean the air for the HEPA element in the Safety Halos® when the air is especially dirty.